Global Developments, Inc., (OTCMKTS: GDVM) has been rocketing up the charts in recent months recently hitting highs of $0.1108 per share followed by some healthy consolidation with a brief dip below $0.04 after which GDVM is once again moving northbound with power running 18% on Friday on 7.7 million shares traded or about $525,000 in dollar volume on the day. GDVM is easily one of the most exciting stories in small caps; the new controlling shareholder, Mr. Melvin Ejiogu, also President of VeeMost Technologies is one of the few individuals who have earned the prestigious Cisco Certified Internetwork Expert (CCIE) certification. Since becoming CEO of GDVM, Mr. Ejiogu has instituted a no dilution policy, affected a massive share reduction. GDVM now runs northbound with little resistance on a locked float, heavy accumulation and next resistance at $0.1108; a break over and its blue skies ahead for GDVM.

Reverse merger stocks can be more explosive than biotech’s when the incoming Company has real value but is undiscovered to investors. Such was the case when Air Wisconsin merged into HRBR when the stock was under $0.05 and over the next year HRBR ran to highs over $3 per share. Another was TSNP which ran from well under a penny to over $7 on the Humbl merger. Magic does happen in the small caps and recently it did on HKD. GDVM is a perfect reverse merger candidate, debt free with a clean balance sheet and a very low OS of 368,333,637 shares outstanding since the massive share reduction. It is expected that VeeMost will reverse merge into GDVM with VeeMost being the surviving entity once the merger is complete. We will be updating on GDVM when more details emerge so make sure you are subscribed to newsytrends.com by entering your email below.

Global Developments, Inc., (OTCMKTS: GDVM) is a Delaware corporation that recently went “pink current” and is virtually debt free and a highly attractive reverse merger candidate. The new Company; VeeMost Technologies provides Digital Transformation solutions and services to organizations. VeeMost specialty is in architecting, deploying, and managing secure digital solutions and platforms for customers to be more efficient, profitable, and relevant in their businesses. VeeMost services and customized solutions have served over 1 million users over the years and have benefited many of the leading enterprises and government agencies around the world. Major divisions of Veemost include VeeShield, Innovation Hub, and Workforce transformation. Once the reverse merger is completed, VeeMost will be the only Cisco Premier partner on the OTC. If Cisco GOLD is achieved, VeeMost would be one of only 64 companies in the United States with that partnership, and needless to say, the ONLY on the OTC. According to an excellent twitter thread on GDVM, looking at the Cisco Gold partnership List & being extra conservative using entry level 10-percentile of the list, we would see VeeMost falling into around $35mn in Rev & $90-$100mn Market Cap if Cisco Gold Partner is achieved. This does not take into consideration any new developments.

$GDVM just confirmed with Delaware Division of Corporations that Merger Certificate for GDVM has been filed on 12/30/22 at 9:22AM EST. GDVM is a "merger survivor" entity which means that another company is merging into it (VeeMost). All can be verified via state corp database. pic.twitter.com/3bLaLMRx2z

To Find out the inside Scoop on GDVM Subscribe to newsytrends.com Right Now by entering your Email in the box below 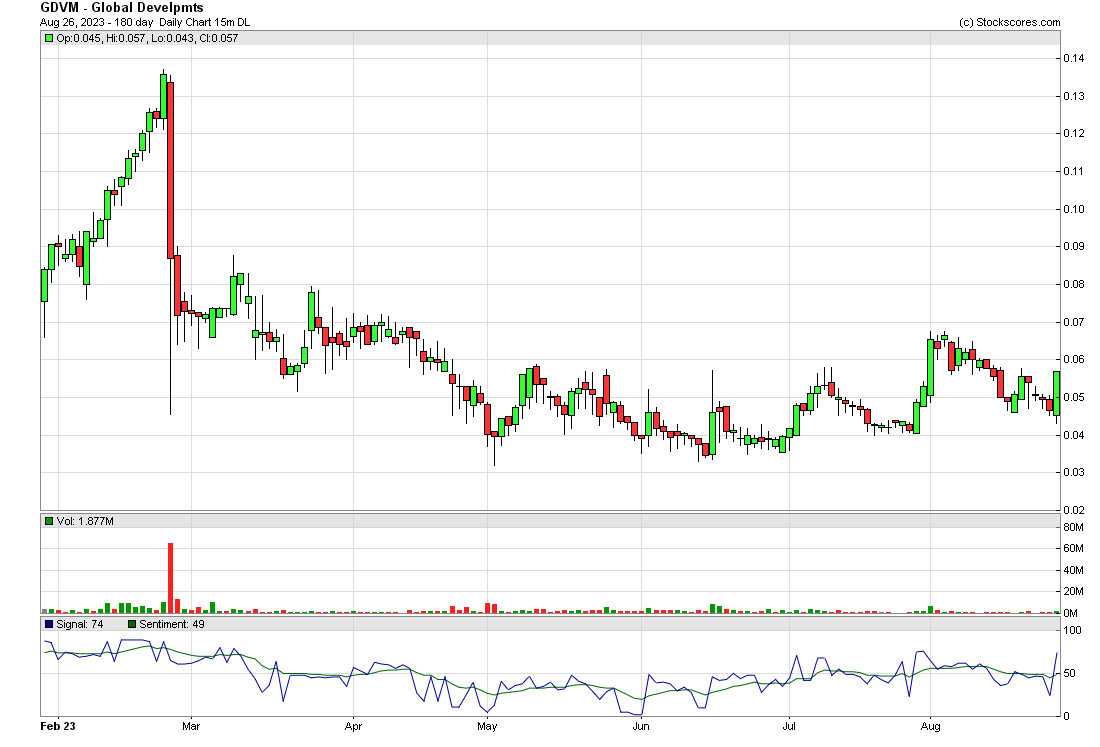 $GDVM When VeeMost officially comes in will be the only Cisco Premier partner in otc with 4 advanced specializations. CDW is a massive company has 7/ Ahead around $1bill in sales has 5. Those companies grew overtime and is a hell of a foundation for an otc company starting out. https://t.co/Q3MIoDtqSx pic.twitter.com/ehXqWdV9WM GDVM CEO is Mr. Melvin Ejiogu who is also the Company’s controlling shareholder with at least 76.56% of voting rights on GDVM. Mr. Ejiogu is a very devout Christian and author of the book “The Greatest Reality Show” available on Amazon. Also, the CEO of VeeMost, Mr. Ejiogu holds several top-level certifications in the I.T industry, and he is one of the few individuals who have earned the prestigious Cisco Certified Internetwork Expert (CCIE) certification. Mr. Ejiogu is also a high-level executive, who in his partnership with Fit Technologies in Cleveland Ohio where he served as the Director of Business Development and Director for Technology Engineering, was instrumental in growing the company’s annual revenue from $8M to $28M in a few years. Melvin has provided services to the US Federal Courts, Internal Revenue Service (IRS), United States Airforce, Fidelity Group, and many more. Melvin contracted with AT&T Labs where he served as a Lead Principal Architect & Designer, designing, implementing, and securing network infrastructures and solutions for large government entities and enterprise customers. He is recognized as an expert in delivering Transformation Services to enterprise organizations and was key to AT&T’s multibillion dollar contract with the United States Airforce.

VeeMost recently launched VeeShield; an always-on, easy, fast, and highly-available cloud-delivered security. Multiple security features are combined into one easily accessible solution, extending protection to all devices, onsite and remote users. VeeMost has cyber security experts who help organizations build and implement security policies. The Company provides management and oversight of an organization’s entire security posture, managing organizational risks and ensuring industry and regulatory compliance. Using specialized tools, VeeMost customers can gain visibility and control across their entire technology infrastructure, having the ability to prevent, detect, remediate, and report on security threats. VeeMost is entering a booming market with Cybercrime up 600% over the past years, malware attacks more than doubling over the past 12 months. The Cyber Security market is growing at 14.5% CARG & expected to reach over $350 Billion by 2026.

$GDVM Ready for the next leg up🚀🚀 RSI reset on multiple time frames, accumulation near highs and setting up for a macd cross on the daily. Also seeing a beautiful flag setting up on the weekly. 2023 should be a fun ride for longs. https://t.co/P0PwQLleRK pic.twitter.com/gfMjILFox7

Currently trading at a $24.7 million market valuation GDVM OS is 368,333,637 down from 3.5 billion in September and a fraction of the 4.5 billion os TSNP had when it ran from under a penny to $7 per share on the HMBL reverse merger. While GDVM is a penny stock and that carries a number of risks this is about as good as it gets on the OTC; GVDM is moving up steadily on a locked float with little resistance and little selling as the stock embarks on a new wave northbound towards $0.1108 December highs; a break over and GDVM could really take off. It is expected that VeeMost will reverse merge into GDVM with VeeMost being the surviving entity once the merger is complete. We will be updating on GDVM when more details emerge so make sure you are subscribed to Newsytrends.com by entering your email below.

Disclosure: we hold no position in GDVM either long or short and we have not been compensated for this article.