Northwest Biotherapeutics, Inc (OTCMKTS: NWBO) is among the most exciting biotech’s in small caps that is under heavy accumulation and being shorted after the Company recently reported positive top-line results from its phase 3 trial on DCVax®-L for Glioblastoma, the most aggressive type of brain cancer representing a a potential market expected to reach $1.4 billion by 2025. DCVax®-L has succeeded where well over 400 clinical trials for glioblastoma having failed over the last 15 years. Both median survival and the “long tail” of extended survival were increased in both newly diagnosed and recurrent glioblastoma brain cancer patients treated with DCVax®-L. The trial met both the primary and the secondary endpoint under the Statistical Analysis Plan for the trial.  The phase 3 trial particularly succeeded in the “long tail” of the survival curve, where there were more than double the survival rates as with existing standard of care.

While the aggressive short position attacked the day the results were initially presented decimating the share price from $2 to lows of $0.3862, NWBO has come back strong since then recently hitting $1.25 per share followed by more consolidation under $1. When NWBO moves, it moves fast, and it will run again, a break over $2.50 per share and NWBO will really take off to the next level. NWBO has a significant Internatinal following that does not see these prices lasting for low as the Company continues to gain exposure though national media stories. NWBO is also the most discussed stock on many internet forums including Reddit where Bio99 recently posted BIO9999’s analysis of potential $NWBO partners. We will be updating on NWBO when more details emerge so make sure you are subscribed to newsytrends.com by entering your email below.

(OTCMKTS: NWBO) is a biotechnology company focused on developing personalized immunotherapy products designed to treat cancers more effectively than current treatments, without toxicities of the kind associated with chemotherapies, and on a cost-effective basis, in both North America and Europe.  The Company has a broad platform technology for DCVax® dendritic cell-based vaccines.

NWBO lead program is a 331-patient Phase III trial of DCVax®-L for newly diagnosed Glioblastoma multiforme (GBM).  GBM is the most aggressive and lethal form of brain cancer, and is an “orphan disease.”  This Phase III trial has been completed and top line data was presented by a key investigator at a recent scientific meeting. The Company also plans to pursue development of DCVax®-Direct for inoperable solid tumor cancers.  It has completed a 40-patient Phase I trial and plans to prepare for Phase II trials as resources permit. The Company previously conducted a Phase I/II trial with DCVax-L for advanced ovarian cancer together with the University of Pennsylvania. DCVax-L is a fully personalized immune therapy made from a patient’s own immune cells (dendritic cells) and antigens (biomarkers) from a sample of the patient’s own tumor.  A multi-year set of doses is produced in a single manufacturing batch, which takes 8 days.  The product is then stored frozen in individual doses, and is “off the shelf” throughout the treatment regimen.  The doses are stored centrally and simply taken out of the freezer and delivered to the physician when needed for the patient’s next treatment.

NWBO has built up a valuable Intellectual Property portfolio that consisted of 204 issued patents and 59 pending patent applications worldwide, grouped into 11 patent families as of January 1, 2022. Of these, 200 issued patents and 47 pending patent applications directly relate to the Company’s DCVax products. In the United States and Europe, some of NWBOs patents and applications relate to compositions and the use of products, while other patents and applications relate to other aspects such as manufacturing and quality control. Many of these patents were acquired with the acquisition of Flaskworks. The expiration dates of the issued U.S. patents involved in our current business range from 2022 to 2036, and pending applications may involve longer time periods. For some of the earlier dates, NWBO plans to seek extensions of the patent life, and believe it has reasonable grounds for doing so. In addition to its patent portfolio, NWBO has obtained Orphan Drug designation for its lead product, DCVax-L for glioma brain cancers. Such designation brings with it a variety of benefits, including potential market exclusivity for seven years in the U.S. and ten years in Europe if the product is the first of its type to reach the market.

An important step in the Company’s growth was the acquisition of Flaskworks, LLC, a company that has developed a system to close and automate the manufacturing of cell therapy products such as DCVax®. The Company acquired 100% of the ownership, and  Flaskworks became a wholly-owned subsidiary of NWBO. Flaskworks was previously owned by its technical founders and Corning Inc. The technical team from Flaskworks joined the Company as part of the Acquisition. It is anticipated that the Flaskworks system will enable substantial scale-up of production volumes of DCVax products and substantial reduction of production costs. NWBOs buildout of its Sawston, UK facility has been designed to proceed in phases, as modules, both for efficiency in the timing of capital costs and to allow flexibility in operations and usage. The Company anticipates that implementation of the Flaskworks system will enable certain phases of the buildout to be simplified and streamlined.  The Sawston facility contains a total of 88,345 square feet on two floors and initial production capacity comprises two manufacturing suites, occupying approximately 4,400 square feet on the ground floor.  These two suites, together with some additional support and storage space, have a potential production capacity of dendritic cell vaccines for about 40 to 45 patients per month, or approximately 450 to 500 patients annually.

To Find out the inside Scoop on NWBO Subscribe to newsytrends.com Right Now by entering your Email in the box below 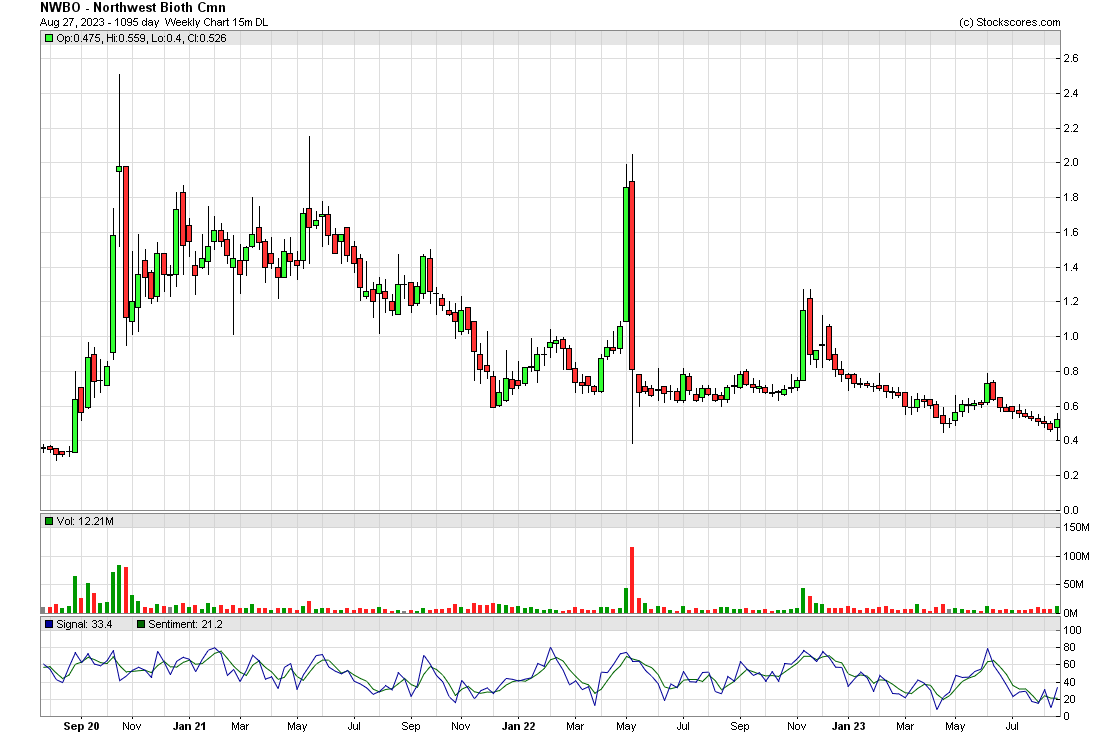 $NWBO #NWBO
These are the kind of results that get you approval with the FDA, EMA, MHRA and Health Canada pic.twitter.com/NllF3CaXaI

On November 17 NWBO reported that in its Phase III clinical trial both median survival and the “long tail” of extended survival were increased in both newly diagnosed and recurrent glioblastoma brain cancer patients treated with DCVax®-L. The trial has met both the primary and the secondary endpoint under the Statistical Analysis Plan for the trial. The trial results were reported today in a featured publication co-authored by more than 70 physicians from leading institutions across the U.S., Canada, U.K. and Germany, in the peer reviewed cancer journal JAMA Oncology, entitled “Association of Autologous Tumor Lysate-Loaded Dendritic Cell Vaccination with Extension of Survival Among Patients with Newly Diagnosed and Recurrent Glioblastoma”.

Ms. Powers, CEO of NW Bio, commented:  “We are excited to see the meaningful survival extensions in glioblastoma patients treated with DCVax®-L in this trial – particularly in the “long tail” of the survival curve, where we see more than double the survival rates as with existing standard of care. With well over 400 clinical trials for glioblastoma having failed over the last 15 years, it is gratifying to be able to offer new hope to patients who face this devastating disease. It is especially encouraging to see these survival extensions with a treatment that has such a benign safety profile. Over 2,100 doses of DCVax-L were administered during the trial, and we found that the adverse event profile was not meaningfully different than with standard of care alone.  DCVax-L is also quite simple for the physician and patient:  just an intradermal injection in the upper arm, 6 times over the course of year 1, and then twice a year for maintenance thereafter.”

From a safety perspective, out of more than 2,100 doses of DCVax-L administered during the Phase III trial, there were only 5 serious adverse events that were deemed at least possibly related to the treatment.  There were 3 cases of intracranial edema, 1 case of nausea and 1 case of lymph node infection.

Dr. Marnix Bosch, senior author on the publication, concluded “This DCVax-L trial, at 94 hospitals in 4 countries, involved the teamwork of a large number of dedicated investigators.  Publication of the results in the prestigious, peer-reviewed journal JAMA Oncology honors this teamwork and demonstrates how the field can move forward with novel therapies and innovative clinical trial designs.”

Currently trading at a $862 million market valuation NWBO OS is 1,058,132,006. The Company is an SEC filer and fully reporting OTCQB and has stated in the past will pursue listing on a national exchange as things progress forward. As we said, NWBO will run again, a break over $2.50 per share and NWBO will really take off to the next level. The Company recently completed its manufacturing facility in Sawston and it has been approved by MHRA giving NWBO the green light to move forward with applying for approval of DCVAX by the EMA which is believed the best way for eventual approval in the US. Also, the positive top-line results from its phase 3 trial on DCVax®-L for Glioblastoma give Linda Powers and her board ample bargaining power to sell NWBO’s proprietary vaccine to the highest bidder. We will be updating on NWBO when more details emerge so make sure you are subscribed to newsytrends.com by entering your email below.

Disclosure: we hold no position in NWBO either long or short and we have not been compensated for this article.