American Battery Technology Company (OTCMKTS: ABML) is looking to make a major reversal since hitting lows of $0.4003 per share. ABML was one of the biggest runners of early 2021 skyrocketing to highs near $5 per share as well as spiking to $1.75 in April of this year before the drop to current levels. The stock is currently under heavy accumulation as long-term holders average down seeing current price levels as low as AMBL will ever go.

ABML is uniquely positioned to supply low-cost, low-environmental impact, and domestically sourced battery metals through its three divisions: lithium-ion battery recycling, primary battery metal extraction technologies, and primary resources development. With two former Tesla executives on its team, ABML is building out its first-of-its-kind lithium-ion battery recycling facility in Fernly, Nevada nearby to Tesla’s Giga Factory. We will be updating on ABML when more details emerge so make sure you are subscribed to newsytrends.com by entering your email below. Lithium-Ion Battery Recycling – ABTC has developed a universal lithium-ion battery recycling system that separates and recovers each individual elemental metal, including lithium, cobalt, nickel, and manganese from end-of-life batteries including consumer electronics, stationary storage applications, and electric vehicles, as well as from defects and waste from battery manufacturing facilities. Lithium-Ion Battery Recycling Plant – In the spirit of using first-of-its-kind innovation to face unprecedented demand and environmental issues, ABTC’s Lithium-Ion Battery Recycling Pilot Plant in Fernley, Nevada has been purpose-designed to function with high yields and low emissions. A project led by a team of experts in their respective fields, the Plant will be the first commercial demonstration of our closed-loop battery recycling process, separating and recovering critical materials from end-of-life batteries and purifying the products to meet battery grade material specifications. The plant will consist of three functional building areas totaling approximately 100,000 square feet of floor space, with 60,000 square feet dedicated to production. The new building spaces include a production building, an office building with laboratories, and a finished goods warehouse. ABTC is also planning to build a universal waste storage facility in Fernley, and a hazardous waste storage facility in nearby McCarran, Nevada in Storey County at the Tahoe Reno Industrial Center (TRIC).

Looks like they are shut down for Christmas at the $ABML Pilot Plant. So I just flew the Drone around a bit and took some photos. Till next time. pic.twitter.com/LB3vbj3h7V

To Find out the inside Scoop on ABML Subscribe to newsytrends.com Right Now by entering your Email in the box below 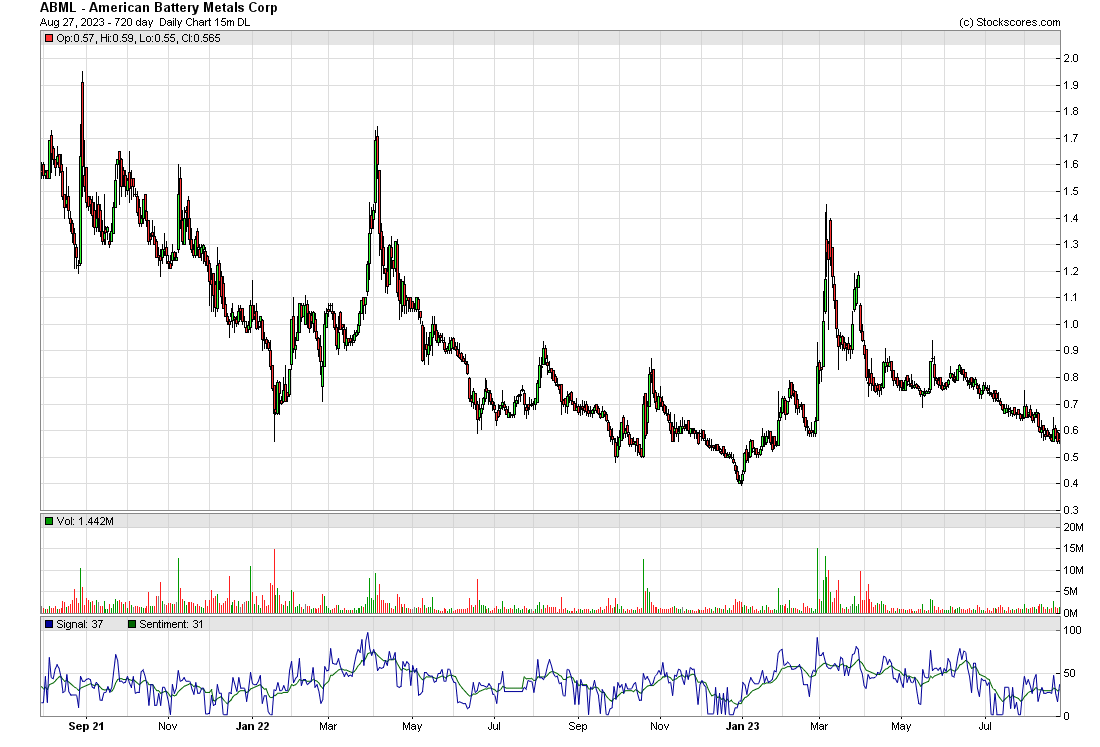 Recently ABTC completed the construction of its battery recycling facility and is now moving into the installation and commissioning of the Company’s processing and utility equipment. The company has also increased its investment in research and development. The investments ABTC continues to make advance the extraction of critical minerals through both its advanced hydrometallurgical process for recycling lithium-ion batteries and its extraction and manufacturing of lithium hydroxide from its claystone resources. These investments are offset by income received for grants previously awarded to ABTC by the U.S. Advanced Battery Consortium and the U.S. Department of Energy’s (DOE) Advanced Manufacturing Office. On November 17 ABML announced it has been awarded a $10M additional competitive grant under the Bipartisan Infrastructure Law to demonstrate and commercialize next generation techniques for its lithium-ion battery recycling processes to produce low-cost and low-environmental impact domestic battery materials. ABTC will work in partnership with Novonix Group, University of Nevada, Reno, University of Utah, North Carolina State University, National Renewable Energy Laboratory, Argonne National Laboratory, and Idaho National Laboratory, and ABTC will rely on Dainen Material and Novonix Group for additional downstream material validation. The company and its project partners will contribute an additional $10 million in cost-share resources, bringing the total project investment to $20 million.

ABTC is currently commissioning its integrated lithium-ion battery recycling Pilot Plant in Fernley, Nev, and this government funding will accelerate the demonstration and integration of next generation advanced recycling techniques into this processing train. The company has already developed these enhanced separation and processing techniques that will allow for the recovery of additional products and further reduction of energy and water consumption and life cycle greenhouse gas emissions. Through this U.S. DOE supported project, ABTC and its partners will validate and optimize each of these advanced technologies at the bench scale, then manufacture qualification batches of these products for evaluation and testing by downstream partners, followed by the scale-up of these advanced systems for integration into ABTC’s recycling Pilot Plant.

Last month, the company was selected for an additional U.S. DOE competitive award through the Bipartisan Infrastructure Law for approximately $57 million to support the construction of its commercial-scale primary lithium hydroxide manufacturing facility to develop its unconventional, sedimentary claystone resource near Tonopah, Nev. This primary lithium hydroxide from sedimentary claystone grant accelerates progress on the demonstration and facility commercialization efforts already underway, as ABTC, in collaboration with DuPont and the University of Nevada, Reno, was awarded a $4.5 million grant from the U.S. DOE in 2021 to build and operate a multi-ton per day demonstration-scale system to accelerate the commercialization and scale-up of this critical lithium manufacturing technology.

ABTC CEO Ryan Melsert said: “Similar to the continuous development required of advanced lithium-ion battery technologies, the recycling of these batteries requires rigorous continuous improvement, optimization, and commercialization efforts in order to advance the forefront of global innovation of these technologies. We are excited to work with our diverse array of world class partners throughout the private industry, public university, and government laboratory sectors in order to optimize and commercialize these next generation of low-cost, low-environmental impact, and domestically implemented advanced techniques.”

Currently trading at a $269 million market valuation ABML OS is 648,553,448. The Company is fully reporting OTCQB with a strong balance sheet and very well-funded as ABML is backed by numerous government and DOE grants. Last year the Company estimated revenue from its lithium-ion battery recycling facility in Fernly, Nevada will be $200 million per year once completed however the price of Lithium has risen dramatically since than as ABTC completes construction and is now moving into the installation and commissioning of the Company’s processing and utility equipment. As we said ABML spiked to highs near $5 in 2021 and hit $1.75 earlier this year and is currently under heavy accumulation as long term holders average down seeing current price levels ($0.40) as low as ABML will ever go. We will be updating on ABML when more details emerge so make sure you are subscribed to newsytrends.com by entering your email below.

Disclosure: we hold no position in ABML either long or short and we have not been compensated for this article.